I came into clowning via a theatrical background having travelled from New Zealand in 1968 specifically to work in theatre. Being a Kiwi and having auburn hair, I have always been tagged with the Australasian nick-name Blue (red-haired: Bluey or Bricky!) and so it seemed natural, when I started clowning, to keep it as my clown name; however, I also have a traditional European Whiteface Clown, by which I am known as Jean Barrel, part of Lockstock & Barrel. But more of that later. Having joined British Actors Equity some 38 years ago, I regularly attended my local Wessex Variety Branch meetings where I met well-known local New Forest Clown, Sam ’Sammy Sunshine’ Rowe, and it was he who first enthused me to ‘don the motley’. Knowing of my interest in circus and clowns, he asked whether I was interested in helping at any of his gigs – to which I enthusiastically agreed.

Some weeks later, he rang to tell me that I had my first gig with him: appearing at the Royal Albert Hall, London (and in front of Royalty!). And so I made my first debut as a clown in one of the finest arenas in the land! 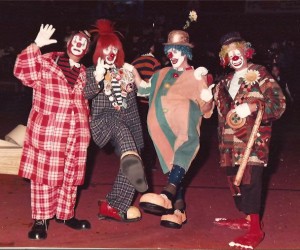 Sammy, a clown of many year’s experience and ex member of Hal ’Kerby Drill’ Brook’s famous clown group, the Super Sausage Squad, taught me many things about clowning, for which I shall be forever indebted. We worked together as clown partners for some 15 years, entertaining at shopping promotions during the week (I initially appeared as fat Clown Policeman Bluey but later took over the stilt work as Sammy’s knee gave out on him) and Arena Acts during the summer weekends. We were promotion clowns for all newly opening Payless Stores for 15 years and also for B & Q DIY Stores for 13 years 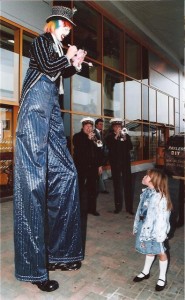 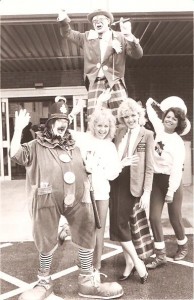 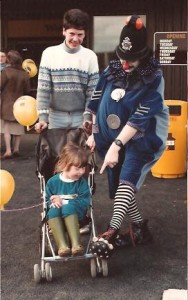 Besides appearing in my partner’s own famous Arena Act (which revolved around escapades with a mini motor cycle contained in a suitcase and Clown Bluey as the stupid officious fat policeman clown forever being bested by the cunning Auguste) we also evolved two new Acts:

One was another Arena Act based on a Clowns B-B-Q. The 30 minute arena act revolved around Sammy eating at an Italian Eatery, the waiter being Clown Bluey. The table was especially built by Sammy and had a revolving top and .22 throwers installed that fired a large prop boiled egg and an equally large roast chicken high into the air. Many other visual gags were included in this act, including a large oven prop, the finale being when a stick of dynamite is thrown into Clown Bluey’s oven to ‘clean’ it, whilst Clown Bluey is hiding inside! After a loud explosion, the oven catches fire and Clown Bluey is apparently ‘barbecued’, but he comes back to haunt Sammy in a re-jigged “Ghosty Ghosty” routine. 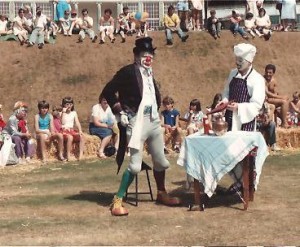 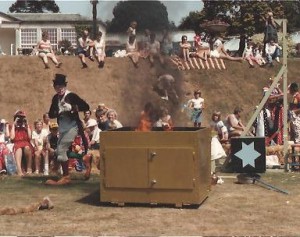 The other act we created was a tongue-in-cheek horror act ‘The Bloomas’, complete with vast black coffin, vampire and a host of special effects! We travelled with this horror show all over Great Britain, performing mainly in cabaret and Disco venues at midnight. We were invited to present this act at the prestigious International Clowns Convention Gala Show at Bognor Regis (but performed a specially adapted clown version for the International Clown Gala Show). 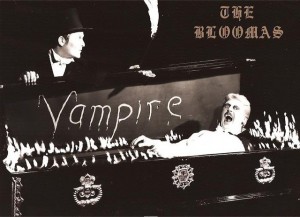 My first clown character came about through necessity: Sammy’s mini motorcycle act needed a foil to help form the storyline and create an antagonistic adversary between the Auguste’s daft character: hence the fat Policeman Clown. I based him on one of the panto police duo I had played in Pantomime in New Zealand. P.C. Clown Bluey is larger than life, exaggerated with a huge tum and bum. His blue uniform is padded with foam, has large red flashing buttons, striped socks and is topped with a police helmet that also flashes blue and enormous clown boots – oh, and his pocket blasts out mini two-tones as well! He comes complete with a folding mini-police motor cycle (outdoor events) and a trick comedy cycle for indoor events. As the character tends to be a little ’abrasive’, I developed a more sympathetic Clown Bluey for children’s parties! 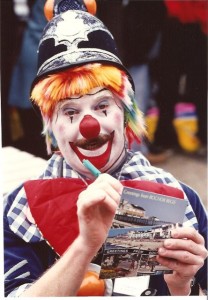 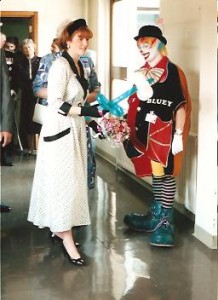 My partnership with Sammy Sunshine eventually dissolved and we went our separate ways and he is now retired, apart from guest appearances.

Clown Car! Wanting to present an outside arena act myself, I purchased a Clown Car (a half-sized Model T Ford from the USA), and rebuilt it into a Fire Engine and installed all the clown gags, powered by air compressors and 12 Volt batteries. After a lot of thought and work, I evolved my own arena clown act and my wife Jenny works in the entrée with me as Flossie Fleabag, the Fire Dog. 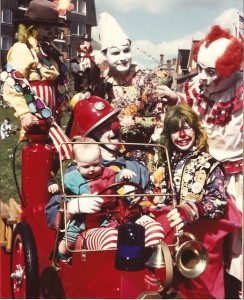 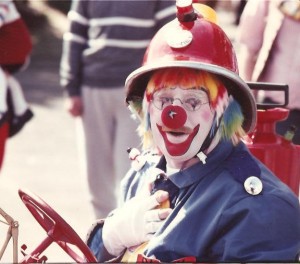 Over 25 years ago, I joined the oldest and premier clown organisation in the world, Clowns International and within two years was voted onto the Committee. I am proud that I am still on the Committee, and have served eight years as Chairman, thirteen years as Secretary whilst Flossie was also Editor of the clowns magazine “The Joey” for twelve years. In 1990, I was invited to lecture in America and the following year was appointed as Foreign Vice-President of Clowns Of America International, a position I also held for eight years. I stood down as Secretary of C.I. in 2003, and am honoured to be an Hon. Vice President. although I continue to be a co-Clown Festival organiser for C.I.

Early in 1992, I joined forces on a casual basis with David ’Perzo’ McIntyre to form ’Lockstock & Barrel’, and we created a traditional musical clown entrée, with David playing the fumbling old eccentric Professor, whilst I was the straight Whiteface Clown. During this act, which we based loosely on the traditional clowning of the famous Swiss Clown ’Grock’ and the late Charlie Cairoli (of Blackpool Tower Circus fame), I played the Alto saxophone and musical saw whilst Perzo played violin and soprano saxophone. We successfully worked this clown act at ’Floriade’ in Holland in 1992 and also represented Great Britain at the prestigious Clown D’oro in Sicily. 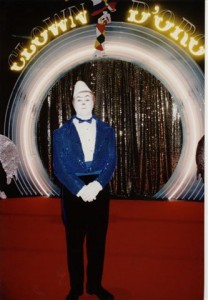 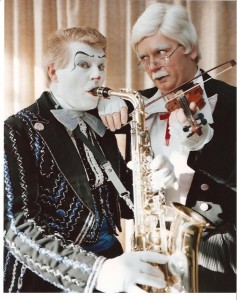 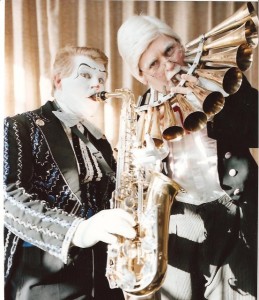 My Whiteface Clown character, Jean Barrel, was awarded the 1992/3 Trevarthen Award for Best European Whiteface Clown at that year’s International Clown Convention. Since that time, I have been honoured many times with awards (please see my Awards page) including performing in front of Princess Stephanie of Monaco in the Princess Grace Theatre in Monaco as “Clown Bluey”.

I continue to clown solo and with ’Flossie’ and also with my friend Conk the Clown. I continue to learn about the great art of clowning – I don’t think there will ever be a day when I cannot learn something new about the art. I have added new characters over the years including a Clown Pirate Bluey and a zany clown Waiter – please see my photos page for images.

In 2003 I joined World Wide Smiles whose aim is to take a smile to children and adults wherever one is desperately needed in the world. This small registered clown charity tours once a year and we have to date performed in St Petersburg (Russia), Romania, Poland, Kosovo, Sri Lanka and India. See our web site above for more information.

I also clown with a new partner, David “Conk” Vaughan from Birmingham, who is also a member of both Clowns International and World Wide Smiles and we thoroughly enjoy clowning together. 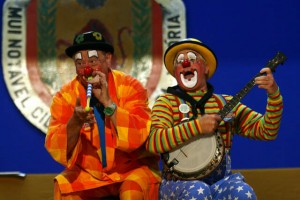 Recently, I have created a new character, ‘B.B.’ He does not wear the traditional clown motley and slap and I use him mainly in restaurants and Corporate events where a clown is deemed as not desirable or suitable, but a good entertainer is – usually performing with balloons and close-up magic. It is interesting as I find my clowning still works without the make-up and costume! 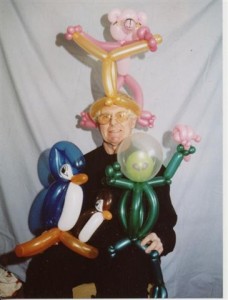